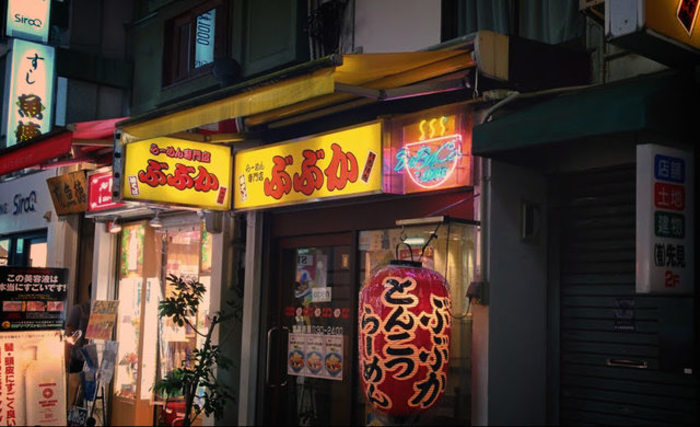 If you're not familiar with abura soba, it's a kind of soupless variation on ramen. Instead of soup an oily sauce is in the bottom of the bowl and many toppings - mainly chili oil and vinegar, but also black pepper, garlic, and so on - are on the counter for you to add according to your own preferences. Ever since I had a bowl at Chinchintei, one of the shops that invented it, I've been a fan.

On the one hand, I don't like Bubuka quite as much as Chinchintei, but it doesn't really feel fair to compare them - while both restaurants make abura soba, they seem to be chasing different ideals. The best part at Chinchintei is the simple flavor and texture of the noodles, while at Bubuka the sauce is the real star of the show. If you prefer your oily noodles to pack a flavorful punch it's not hard to imagine you might prefer Bubuka.

Besides the sauce the other remarkable thing about Bubuka is the pepper. Sitting in a standard shaker it's easy to miss, but on top of being freshly ground it's somehow composed of mostly equal-sized grains, perhaps a quarter the size of sesame seeds, that add a lovely texture to the noodles as they stick in the oil coating them. I recommend adding as much as you can handle.

Bubuka also has some very important advantages over Chinchintei - while the two shops are in the same general region of Tokyo, Bubuka's location right next to Kichijouji Station is much more accessible than a fifteen minute walk from Musashi-sakai, and they're open late rather than closing up by 4PM. They do fill up at standard mealtimes though, so either be prepared to wait or be flexible with when you eat.

In addition to their shop they have their own instant abura soba. I haven't had it - no matter how good it is I'm not sure abura soba would stay tasty as instant food - but if you can't get out to the shop it may be worth keeping an eye out. Ψ