See my introduction to Lennus - written before I played it - here.

Over the weekend I played Lennus for a little over an hour. While it was illuminating, perhaps the biggest discovery was that the game holds up rather poorly, and several of the innovative aspects of its gameplay system don't work very well in practice.

The first thing to keep in mind is that it was released in 1992, two years after the release of the Super Nintendo. This is the same year as Final Fantasy V and Dragon Quest V; RPGs had already become something recognizable, but this was before the big changes in the mid 90s with the release of games like Pokemon, Super Mario RPG, and Final Fantasy VII.

Like early Final Fantasies, Lennus is hard and not particularly fair. I got a Game Over twice in one hour of play, occasionally running into powerful random encounters I couldn't successfully run from. Once I learned to be careful it wasn't too hard to advance, but this is pretty different from modern games that will warn you before throwing you into the lion's den. 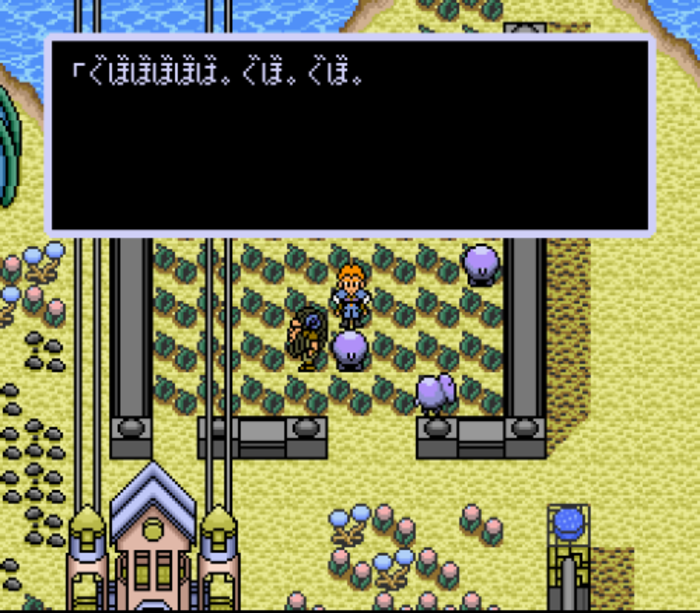 The combat had other pedestrian issues: the random encounter rate felt irritatingly high, encounter difficulty was basically inversely proportional to the number of characters in the party, and the lack of options in combat made it busy work. Unfortunately the magic system didn't add variety; since spells use HP instead of MP, deciding whether to use a spell or just attack with a weapon is just deciding whether being hit by a monster does more damage than the spell cost. Since the first few spellcasting characters are physically weak it's almost always worth it, so battles don't really call for much decision-making: remember to heal, cast spell or attack, repeat.

The direction-key only menu didn't work the way I thought it did before playing. Pushing in a direction immediately selects that action, or it moves the crosshair in the middle of the screen to change the actions you can select. Confirmation is a separate step after you've chosen everything. This model of interaction is used even without the directional menu; for example, when changing equipment you have to choose what a character wears on all six locations every time you want to change one. Thankfully the default choice is always the currently equipped item, but it's still tedious. In any case, the surprise of arrow presses in a menu being equated to committing to an action (even provisionally) was stranger than I expected and I see why it's not imitated.

The magic system theoretically involves different elemental attributes and allows for spell discovery, but there was no sign of that becoming accessible anytime soon in my short playthrough.

One frustrating part of the game was that items and spells had no explanations in-game at all. One item I had several of - "Somebody's Door" - just said "this can't be used here" when I tried to use it once. At least in battle items and spells select either friends or foes so you can tell if they're offensive or beneficial, but it was quite confusing.

The music was actually a strong point, energetic and exciting; it turns out the composer, Kouhei Tanaka, would later write the score to Sakura Wars.

The graphics were a mixed bag. The concepts were lovely, and the strangeness of building and town designs and full-screen art - what drew me to Lennus in the first place - were like nothing I've ever seen. However, one of their distinguishing features is that they don't really look like pixel art, and that carried over to the more mundane graphics. Things like stairs, doors, and characters look square and flat, usually with no shading, to the extent that physical relations between objects can be hard to read. In battle, early-game enemy designs were occassionally amusing but mostly dull (rats, blah), and invariably poorly animated. In an early scene a whole building shakes, as does everything on the screen - except player characters, who you immediately realize were on a separate sprite layer.

The story was typical save-the-world nonsense with some extremely strange and inexplicable twists early on. Destroying your village and endangering the world by releasing the ancient horror that happens to be locked in the shed at your school is typical enough it passes as genre convention - really! - but here are some other bizarre events that happened in my playthrough:

It's unfortunate, but it seems that while Lennus had some real talent behind it and the willingness to experiment, it didn't come together in a way that lets it surpass the issues of RPGs of its era. Ψ