In a dim corner behind the Don Quijote in Asakusa is an unassuming building that holds one of the last Smart Ball parlors in Japan. 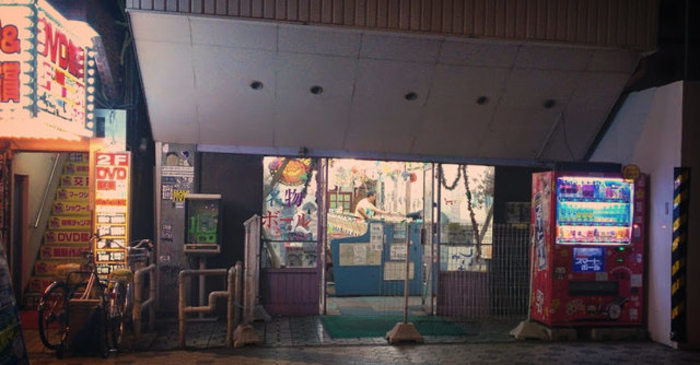 Smart Ball was a precursor to pachinko with horizontal cabinets and larger balls, about the size of common marbles. The machines in Mimatsu-kan are from the 1950s, and many of them are broken - as the machines wear down, when parts give out it's impossible to find replacements so they stay unrepaired.

The staff mentioned that the blue glass marbles they use now aren't actually the original balls - the old balls were purpose-made opaque white ceramic pieces, and they actually have quite a few of them stashed in the open spaces in the cabinets they can show you, but they're not put in rotation because they're impossible to replace. Apparently every so often someone in their seventies or so will come by and ask why the balls aren't white.

Note the butterfly in the middle. When you score, new balls roll across the glass to the feed at the bottom of the cabinet.

Though Smart Ball is a lot simpler than modern pachinko, some of the most important features are already there - first, you start with seventy-five balls, so the ball economy is already completely different than American pinball. The other key point is the high-scoring gimmick holes in the middle of each board. The number next to a hole is how many balls you get for entering it, and for the central holes the parts over them move - for example, the butterfly closes after you score with it, and to open it again you need to score on the red hole. The holes connected by two lines require you to get a ball in both holes before you can score - if you only go in one hole the ball is held there until the other one is filled. 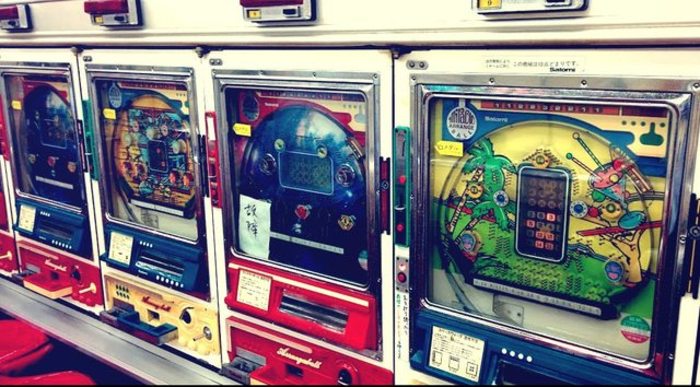 Besides the Smart Ball machines the walls are lined with Arrange Ball machines from the 1970s, more direct precursors to Pachinko. They're upright, use small metal balls, and already have games included, though the sound and blinking lights that would define pachinko aren't quite there yet. Quite a lot of these cabinets are broken.

The logo on top of the cabinets.

Mimatsu-kan is only open on Sundays and holidays from noon to 7PM. A game is only 300 yen and the friendly old couple who staff the place will give you a lot of free balls anyway. Even with the cheap rates and proximity to the most touristy part of Tokyo it's always mostly empty. This makes it nice to visit, but unfortunately that means it wouldn't be surprising if it had to close suddenly. Hopefully it'll be open for a while yet. Ψ