The two images below are scene charts from a strategy guide to Sakura Wars 3. Each page covers a "free time" segment when you can move around to different locations. All the Sakura Wars games are divided into "episodes" like anime, usually totalling about 13 per game, where each episode has a fixed story portion, one or two battles, and one or two of these free time segments. 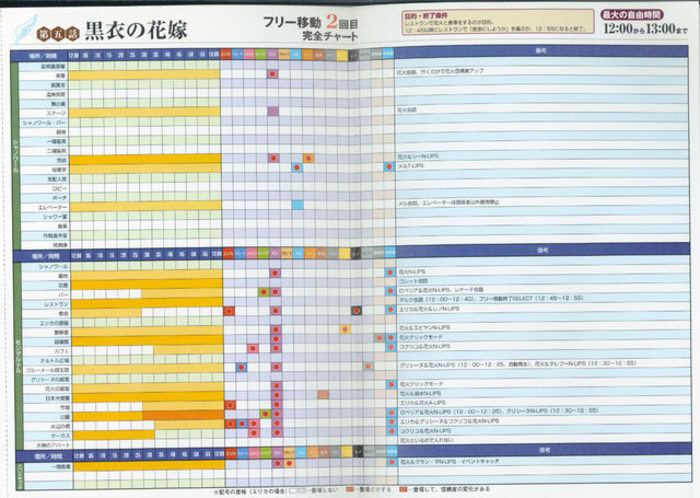 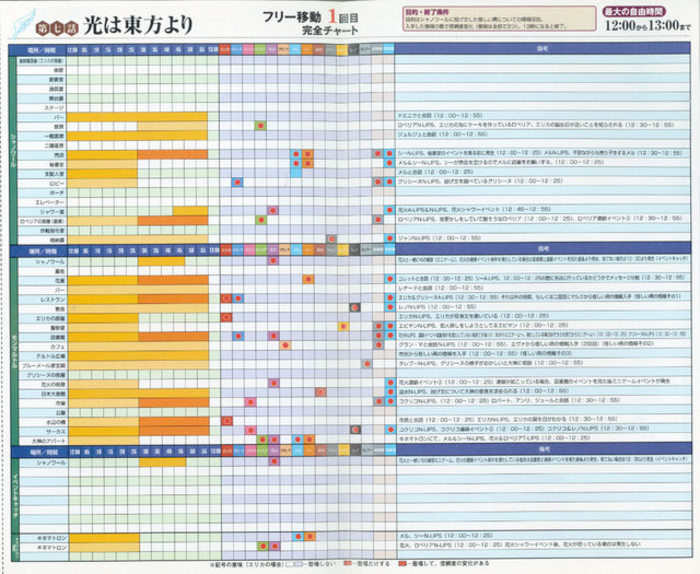 Each free time segment is an hour consisting of turns that advance the clock five minutes. Each square column in the area with the wide yellow or orange bars is one of these five minute turns, each row is a location, and the bars represent the time span that a scene is available. The large horizontal divisions (the blue header lines) separate locations in the city from locations in the theater that serves as the secret base and home for the characters.

Note that movement between scenes is not restricted to adjacent locations - you can move to any available area on each turn.

The colored squares in the middle show which characters appear in a scene. A red dot in a colored square means the scene can change the character's mood (note that almost every square has a red dot).

The chart titled 黒衣の花嫁 / "The Bride in Black", is an episode about the character Hanabi, so you'll notice the purple squares that represent her are in almost every scene. The other chart, titled 光は東方より / "Light Comes from the East", has more of a mix of main character scenes. The two rightmost columns (grey and light blue) are actually not characters but "experience points" and "captain level".

Most scenes are available for either the first or last half-hour of a scene, and many locations have only one scene per episode. Also note that while it's not explicitly clear from these diagrams, very few scenes depend on other scenes - this happens infrequently enough it's explained in the notes on the right. While every scene has notes, most are just a short scene description and what kind of LIPS encounter it is. Ψ