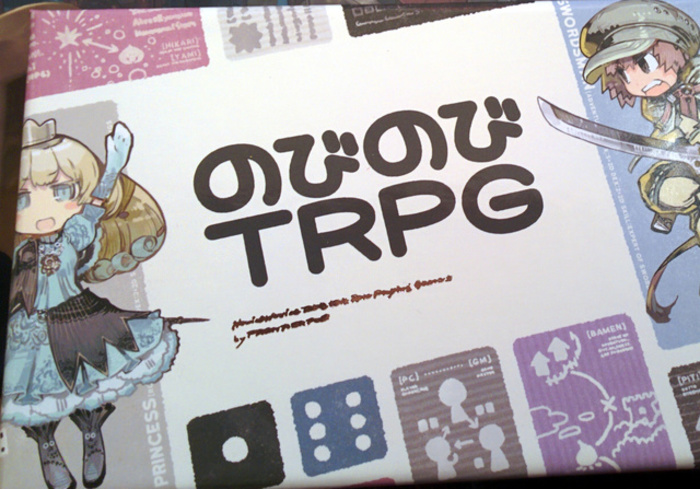 While Novi Novi definitely plays like an RPG, physically speaking it's basically a card game. There's many different types of cards: the current player and GM markers (one of each), the character cards (five cards, each with two different sides), the light & dark cards that modify characters (17 of each), the scene cards (39), and the climax cards (8). These all come packed in a box with six wooden dice, which is everything you need to play. Removing the need for pencil and paper typical in RPGs was one of the design goals.

To start the game, each player picks a character. Besides typical classes like Knight, Cleric, and Wizard, there's more exotic options like Ninja, Villager, and Princess too. Each class has a special ability described at the bottom of the card and ratings in two stats: 力 (Power) and 技 (Skill). Customization happens over the course of the game, so after picking classes you can pick the first GM and jump right in. 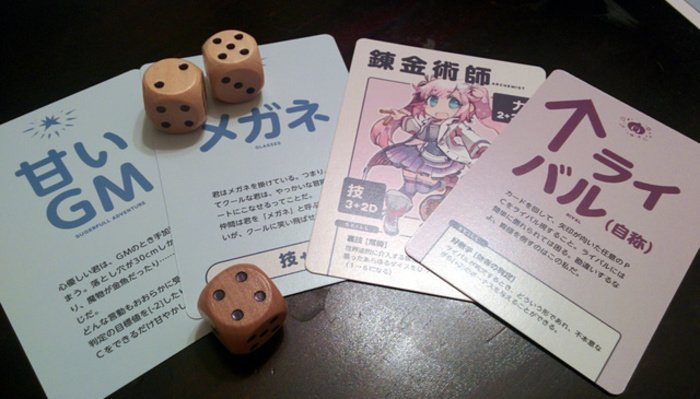 This alchemist is a softball GM and has picked up glasses. They also have a rival - arrow cards are spun so their arrow picks which player they apply to.

The GM in Novi Novi isn't a single person; instead each player takes turns being the GM, with the person to their left playing the main character for that scene. At the start of the turn the GM will draw a card from the scene deck and read out the scene description, embellishing as appropriate. At the bottom of the card there's an explanation of how to determine success or failure; sometimes it's a simple check against Power or Skill, sometimes either one can be used as appropriate, and sometimes everything is decided by role playing. Some scenes have special outcomes, but generally the lead player for the turn draws a Light card on success and a Dark card on failure. Both types of cards usually make your character stronger, but Light cards tend to be straightforward positive things, while Dark cards are harsh backstories or interesting complications.

After everyone's had three turns as the GM you draw a single climax card, and all the characters work together to overcome the last boss or what have you, bringing together any loose threads you created during the scenes leading up to it.

I've managed to play two games through, each with roughly four people and taking about forty-five minutes. To give some example scenes...

The party wanders into a cave in search of treasure, with the amnesiac bard leading the way. Opening the chest he finds... his own notebook! Full notes of his previous adventures, everyone ends up grudgingly accepting his notes as an authority. Listening to him read from them is better than letting him sing at least.

Emerging from the dungeon, as night falls the adventurers take shelter in a nearby mansion. A storm starts up and suddenly the mansion is attacked by zombies! Fortunately, the princess remembers this is one of her family's mansions and the zombies - actually the maids formerly in her service - become her loyal (if slightly dead) servants again. Unfortunately, the experience of being swarmed by zombie maids shocks the princess into becoming a hikikomori, and she spends the rest of the game eating potato chips in her room and only grudgingly participating in the adventure.

After being chased by strange men through the city streets, the party wizard reveals he's actually a former member of the werewolf mafia! The strange men are agents chasing after him to extract revenge. In attempting to flee the agents through a backstreet the party gets stuck in an alleyway overflowing with cats. That turned out to be a trap set by the leader of the werewolf mafia, and the final battle was decided in the middle of a sea of fur.

As the scenes above hopefully illustrate, Novi Novi delivers on its promise of a no-prep RPG experience with a heaping helping of the delightfully absurd. Our table was laughing at ridiculous experiences quite a lot both times we played. 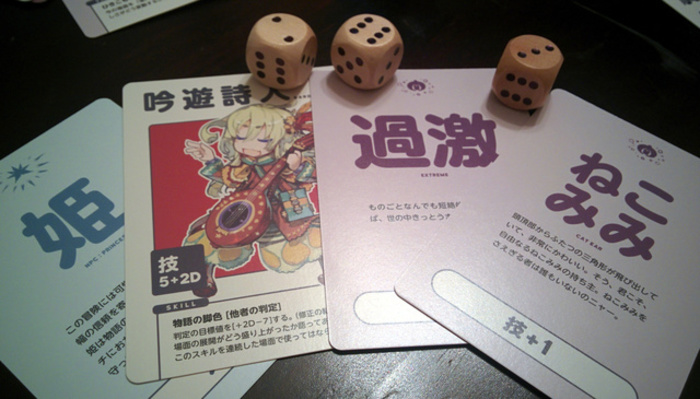 This bard is extreme and has cat ears, but somehow managed to pick up a princess anyway.

Novi Novi also does a great job avoiding the main problem I've seen with other GM-less games: managing spotlight and player energy. In games where narrative control is just informally negotiated between the players, like natural conversation, people uncomfortable with improv can end up staying quiet while the most talkative players take over. On the other hand, in games where the spotlight turns are formalized, some people can be uncomfortable being put on the spot when it's their turn to take the reins. By passing around both the GM and lead player roles, Novi Novi RPG spreads the spotlight around, gives the GM player some material to start with via the scene and light/dark cards, and keeps anyone from being put in the spotlight without another player to support them. While the games I played still varied a lot in how improvisational people were, the dialog set up by the player and GM roles plus the simple fallback of rolling a stat check kept things from ever getting really stuck.

There are a few things I'd like to see improved if Novi Novi was ever to get version 2:

All of the above are very minor complaints - Novi Novi RPG is a great game to reach for when you feel like having an adventure on the spur of the moment, or for the situation where RPG night has to be called off when something comes up and you can't go ahead with the session.

As far as I know there are no plans for an English edition, and there's no easy way to provide a translation guide for it, but if you get a chance to play do give it a shot. Ψ