A while back I was going through my small collection of issues of RPG Magazine from the early 90s and a back-page advertisement for a "Net Game" caught my eye. Checking the date on the magazine - 1990 - I was surprised, since it seemed to predate widespread adoption of the Internet - what could a "net game" have been? Reading up on the game in the advertisement - 那由他の果てに ("At the Edge of Infinity") by 遊演体/Youentai - I discovered the fascinating world of play-by-mail RPGs in 1990s Japan. 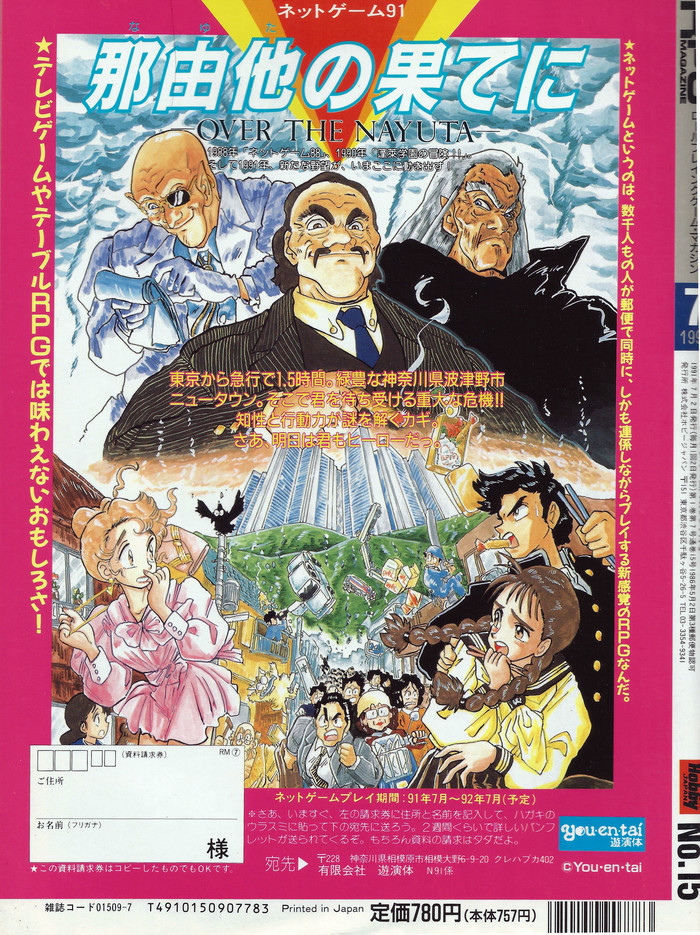 The ad that started me down this path.

☙ What Were Net Games?

A Net Game was a play-by-mail RPG with one world shared by a huge "net" of players. A given game would typically run for a year, during which you'd have one character and make one move - an in-world action - each month. While this may sound like a glacial pace of interaction, it only accounts for official actions; communication between players allowed for information sharing and coordinated efforts that could form the greater part of the game.

To sign up for a Net Game, you'd write Youentai for a free pamphlet that explained the game's setting, basic rules, and had a character creation form. After filling in your form and sending it in, you'd get a monthly magazine featuring news from the game world, player submitted art, columns, in-world classified ads, a list of suggested moves, possibly some unique clues, and a card to submit your turn for the month. Most games had other extras; games set in Hourai High School included student membership cards, for example.

While some moves would be completely specified ahead of time ("go to the library and look for a secret door", "investigate the abandoned schoolhouse"), the main attraction of the game was writing a free description of what you wanted your character to do, similar to what you'd do verbally in a tabletop RPG. The next month you'd get a "reaction", a detailed description of what happened to your character written in the style of a short story. If you were lucky your character would play a major role, though typically one reaction would cover many characters attempting roughly the same thing in the same place. 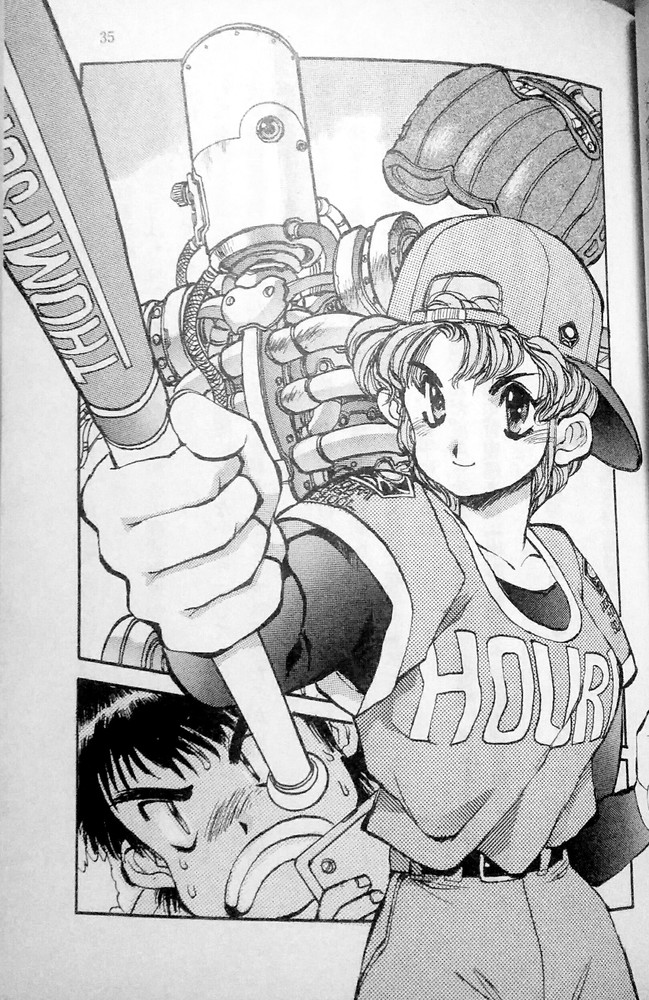 The baseball robot and the softball captain, by Junichi Inoue.

To give some examples from ネットゲームがよく分かる本 ("Understanding Net Games"), an introductory book that follows an imaginary player, the first month he writes that he goes to the baseball field to practice with the robot he's been working on. In his reaction, his character gets into an argument with the captain of the softball team over who gets to use the field. His robot goes up against the softball captain, loses, and he yields the field. Besides the main part of his reaction, there's also a short note from the game master who wrote it, as well as a list of player characters who ran into each other, including their real-world contact information. By contacting other players you could exchange notes and solve mysteries without waiting for a monthly reply. Listing real addresses was common but not required; Youentai could proxy mail for players, but since mailing directly was faster many preferred it.

Softball vs Football, the eternal struggle. By Junichi Inoue

The next month, the player writes that he'll go to the sports fields to work on making his baseball robot more powerful and challenge the softball ace to a rematch. However, his plans are not referenced at all in his reaction - instead it's all about the softball team arguing with the football team about who gets to use the field. While in most of the book the main character has more luck in replies than any real player could hope for, this chapter reminds potential players that things don't always go their way.

Month after month you'd send in your reply and wait for your reaction and the monthly magazine. At the end of the game there would often be a large real-world meetup, and most years they published a commemorative book chronicling major game events. While some plot developments would be planned before the game began, many twists and running jokes started off as postcards sent in by ordinary players.

☙ The Golden Age of Play by Mail

While the particular term "Net Game" was only used by Youentai, after their successful start as a business in 1988 other companies popped up and followed the same model. You can see a big list of those here.

At their peak the largest Net Games had roughly ten thousand players, which probably makes them the largest PBMs of all time. Finding the numbers of players for PBMs is hard now, as most companies operating them dissolved at the end of the 90s, but Saturnalia is the next largest game I could find a record of, topping out around three thousand players.

Youentai went through many different settings, but their most successful one was Hourai High School, which expanded into two tabletop RPGs, several novel series, and a Super Famicom game. The main tabletop RPG, long out of print, is available free with the consent of the rights holders here. 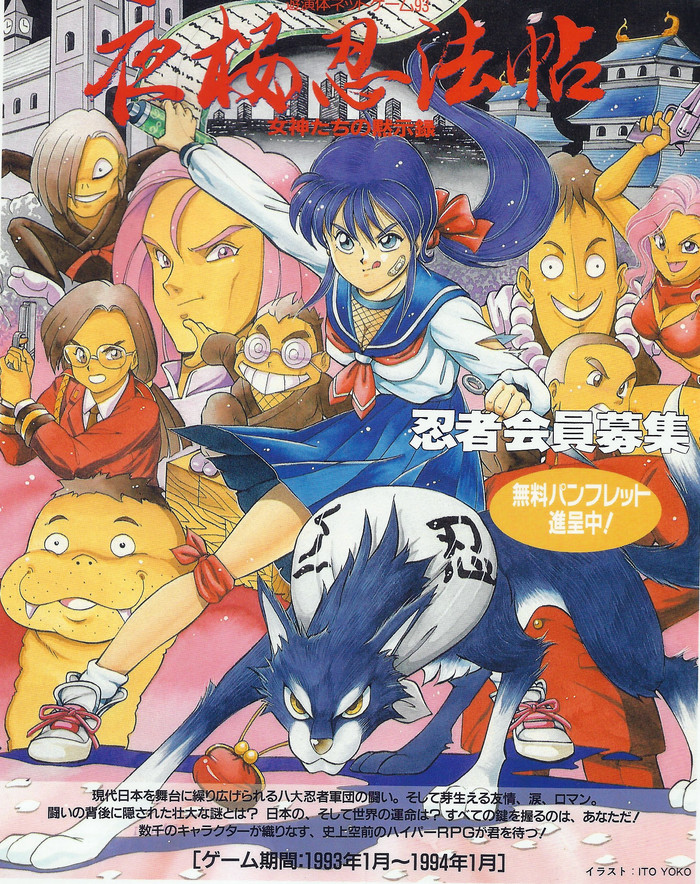 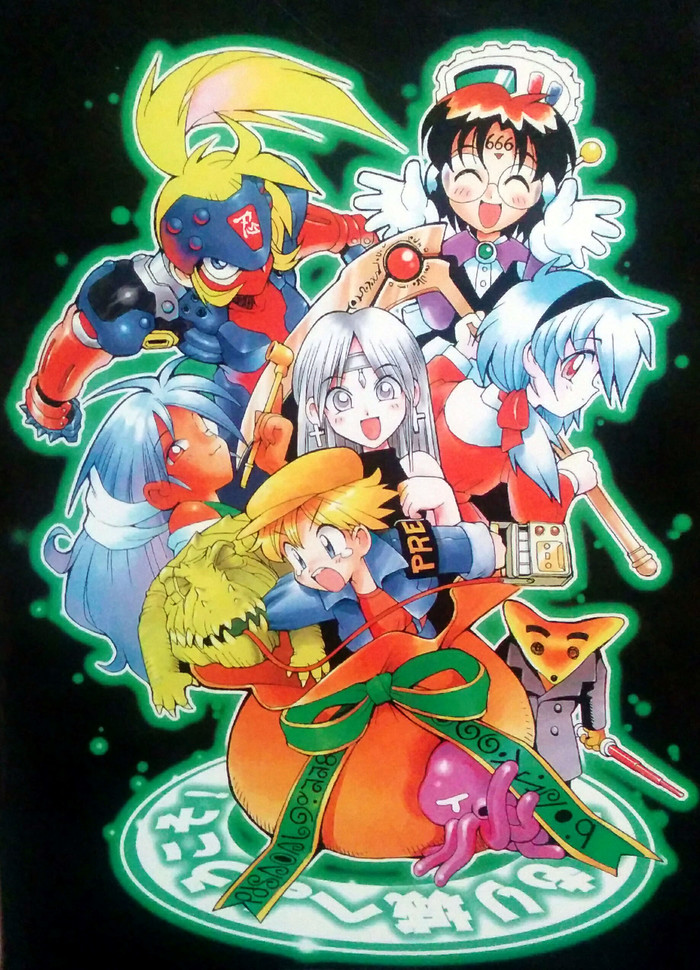 The back cover of the 1996 game "Welcome to Bat Castle"'s annual collected volume. Art by Shinya Kaneko.

After their first game in 1988, Youentai ran a game every year from 1990 to 1998, usually for 12 turns, before turning to online-only games for a few years and then ultimately disappearing. It's unclear if the company was ever actually dissolved, but since their website went dark around 2001 they haven't done anything in public.

While Youentai has essentially disappeared, several companies started by former members remain active and influential in the world of Japanese games.

Arclight started off as the Kanda office of Youentai, separating to become its own company in 1998. They publish board and card games and also run Game Market, the largest analog game event in Japan. Based on copyright statements on the Hourai TRPG release mentioned above, it seems plausible that Arclight took over Youentai's assets at some point.

Liar Soft was founded by former Youentai writers. They're known for adult games with unique settings; it turns out some of the more inexplicable parts are PBM in-jokes. One of their games, 行殺・新選組 (Gyousatsu❤ Shinsengumi) takes its name from "行殺", a PBM slang word for when your character was killed off in a passing reference in a single line of a reaction.

Elseware was founded by one of the most famous Youentai GMs, Fusahiko Yanagikawa AKA Kazma Sinjow. While not primarily a consumer facing company, recently they've worked on scenarios for many high-profile mobile games, and Sinjow has a successful career as a novelist. (Update: Shortly after I posted this a Sinjow participated in a lengthy interview about Net Games).

The information here only scratches the surface of the history of PBM RPGs in Japan - each Youentai game has a mountain of documents about it waiting to be discovered, and if you can find old players there's surely a pile of doujin lurking somewhere. Also, while Youentai may have been the most successful company to operate large-scale games, it certainly wasn't the only one, and each game has many stories to tell.

Even if these PBMs have faded from popular memory, it's not hard to find someone reminiscing about them on the web, whether on scattered blogs or new hashtags. Many artists and writers who got their start as PBM game masters are still active. At a Comiket in the last few years I even managed to buy a Hourai High 25th anniversary badge, sold next to a book documenting a small non-commercial PBM run by friends and acquaintances just after Net Game '88.

Should we be ready for a new play-by-postcard game in 2018? I wouldn't go so far as to say that, though Elseware ran an online PBM as recently as 2013. But with the recent, quiet rise of games based on piles of user-written content and the continuing struggle to create rewarding communities on the Internet, we may still have a lot to learn from Youentai. Ψ