At the Akihabara Super Potato this weekend I took a peek in the rare games case and noticed something that surprised me: a Wonderswan Color game for over 50,000￥, or 500USD. The Wonderswan consoles definitely had their fans and success stories - Riviera was first released for the console - but even though it probably has rare games it was hard to believe there would be enough interest a price that high would make sense. When I got home I checked online and found another copy of the same game, except this time it was over 70,000￥. 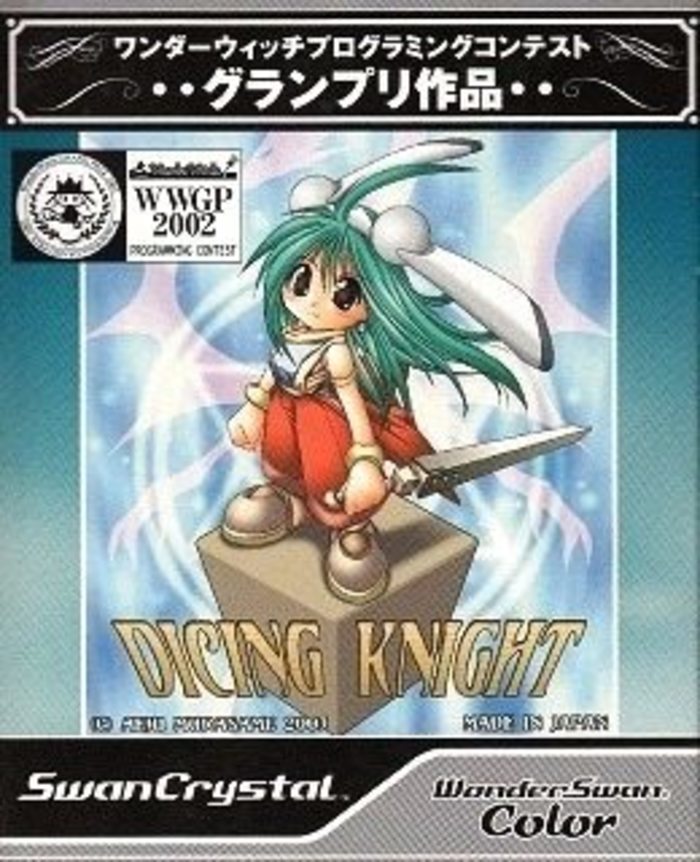 The game in question is Dicing Knight, not to be confused with Dicing Knight Period. The Wikipedia article refers to a Dicing Knight Legion; there appear to be no other references to this online, but a Japanese blog post from 2010 does suggest that two versions of the game were released: /Dicing Knight/ and /Dicing Knight./ In case you didn't catch it, the second one's period is part of the title, thus when speaking it's called "Dicing Knight Period". It's not entirely clear, but the non-Period version - the first one sold - may only run on WonderWitch systems (more about that briefly).

The game itself looks a great deal like a traditional Zelda title, except that maps are randomly generated and hard - it's an action roguelike. Based on the gameplay video the range of items is much broader than it would be in Zelda, with watches that allow you to stop time as well as cute bunny heads.

One interesting detail about the game is that it was developed for a contest using the WonderWitch (offical homepage), essentially a devkit with a C-based toolchain for the Wonderswan that was available to normal consumers (one was for sale at Super Potato for around 20,000￥). One of two winners of the 2003 development competition to be officially published, the other was called Judgment SilverSword, and while also rare it went through enough printings that it doesn't quiet enjoy the status of Dicing Knight.

The developers of Dicing Knight are also chugging along, releasing games regularly at Comiket. Their latest is Anisotropic Girl Magatsuhi, which looks like the classically bewildering Animal Attack Gakuen.

After all that I feel like I've learned a little something about the history of WonderSwan indie development but nothing at all about used game prices. The thing about mysteries is that some of them simply have no explanation. Ψ