For ProcJam 2015 I wrote a script that generates architectural facades in the style of Andrea Palladio. The entry page is here and you can see the generator for yourself here to get that geometric mansion you've always wanted. The code is on Github. 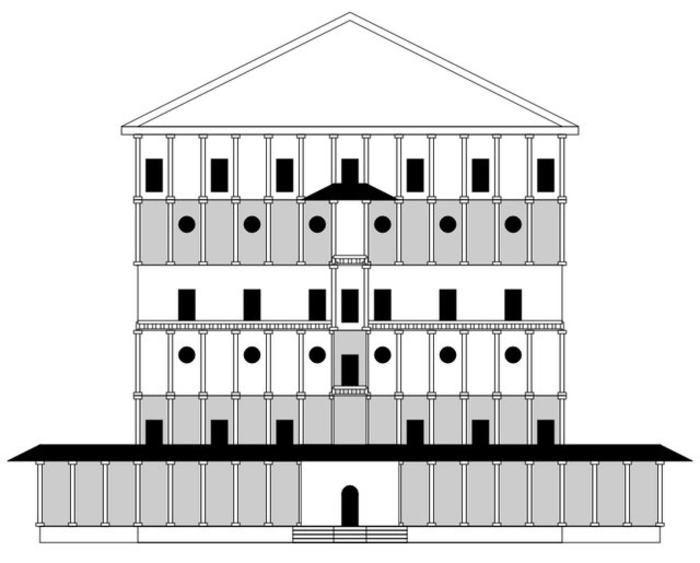 Palladio's influence on architecture is seen in all sorts of places, including many early examples of American monumental architecture. Growing up I often went on field trips to Drayton Hall, which despite being built long after Palladio died is a relatively straightforward application of his characteristic emphasis on symmetry, geometry, and depth.

When it comes to implementing a facade generator Palladio's style is particularly suitable as he literally breaks it down into a system of rules in his four books. A computer program to generate villa layouts automatically was actually written and a paper published on it in 1978; a caption in it notes "a parametric shape grammar that generates villa facades could be defined by use of the techniques developed here." While I didn't use the technique in the paper - I've never found shape grammars easier than working with abstract data and only drawing at the end - I saw it a while ago and the idea had been in the back of my head for a while.

In an amusing coincidence ProcJam turned out at least one other mansion generator, Châteauxuaetâhc by Wandering Road. It's in 3D and thus emphasizes the overall mansion layout more than facades; the gardens are particularly lovely.

Update 2015-11-17: It turns out that in 1992 there was a whole book written about generating Palladian Villas! Possible Palladian Villas is easy to find for sale. It even included software you could use, though unfortunately I haven't been able to find that for sale anywhere. There is this review though, which includes some screenshots (including the one above). Ψ